This year’s excavations are slowly coming to an end. Despite many organizational problems, thanks to the great team, and in particular to numerous volunteers from all over Europe, they can certainly be considered successful, although of course, unfortunately, we have not managed to do everything (but we still have time 😊). The attached photos explore the Mesolithic stone structure used at least partly as a hearth. The feature is part of the hearths complex and is huge for our conditions because it is over 2.5m in diameter! Unfortunately, it was partly destroyed by a prehistoric fallen tree ☹ The hearth probably has a ritual origin, because as it seems it is associated with the ritual pit discovered next to it, containing more than 2,000 intentionally crushed flint, numerous bones and elements of the wooden construction. Interestingly, this pit was filled up intentionally very quickly and another hearth was built on it, under which (as a kind of deposit) we have discovered a collection of the selected big Late Palaeolithic flints (this practice was also observed for other objects of this type). The same 14C datings were obtained from the bottom of the pit (depth about 130 cm) and the hearth built on it, which confirms the homogeneity of the structure. Great discovery and we want more! 🙂 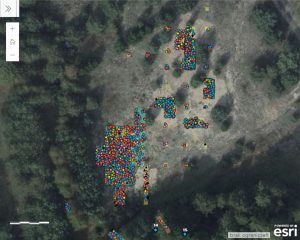